What is making me happy on the internet?

One thing after a hard day of work or going out with friends, I find myself really engaged into watching anime as it is my most favorite genre of shows to watch on tv. The content and the artistic creativity that they put into each show always have me waiting for more episodes every week and if I can’t I look for another anime to pass time. At first I didn’t like anime but after times of hanging with my friends and persuading me to watch I ended up becoming a fanatic to the shows. The one show that keeping me really excited this week is a show call “That Time I Got Reincarnated as a Slime”. 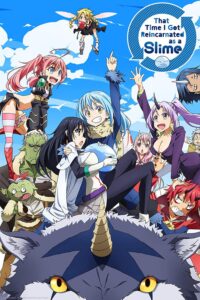 This show is absolutely hilarious and interesting but this last episode had me really happy and laughing in tears due to a reference of other famous Japanese anime and American satire. If you would like to know more about the show it is streaming on Crunchyroll and funimation streaming services. It is really funny and what made me cry in tears was this part at the bottom

“Street Fighters” and “DragonBall Z” are two japanese animations that really got anime over to western culture. From their influence in the western culture it inspired anime developers to go out and create more using these successful animation as inspiration and templates to create their own. Time and time you will see in these anime that some of them show respect by adding easter eggs(parody reference) into their anime to show respect to the ones that inspired them. I love seeing like this cause it shows how japanese anime stay true to their community.