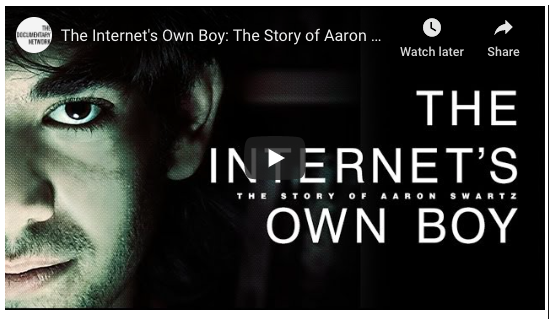 I would like you to watch the portrait documentary of Aaron Swartz, The Internet’s Own Boy. Swartz was a prodigy web developer that participated in some seminal web projects – RSS, Creative Commons licensing, and Reddit.

He founded Demand Progress which successfully campaigned against the Stop Online Piracy Act (SOPA) with a broadly adopted 24 hour internet blackout of well know sites like Wikipedia. Swartz was later arrested by M.I.T. police for systematically downloading thousands of academic articles from JSTOR and federal prosecuted with charges of wire fraud and 11 violations of the Computer Abuse and Fraud Act. Facing possible jail time, Swartz committed suicide at the age of 26.

Larry Lessig who was a mentor, colleague, and friend to the much younger Swartz commemorated his life and work with Lessig’s appointment as Roy L. Furman Professor of Law and Leadership at Harvard Law School with a lecture titled “Aaron’s Laws: Law and Justice in a Digital Age.”

**Assignment – In a new blog post, find a moment in either the documentary about Swartz or the Lessig talk that you relate to as an important idea/moment in Swartz’s work as a programmer and/or activist. Tell us why you find it significant and find/make a visual artifact that represents your thinking as well and embed it in the post.