During the start of this pandemic, I have to admit I tried staying away from the internet and focused more on spending time with family indoors playing games, or starting new hobbies. We created some amazing memories while playing those games. One for example is catching my father cheating on our favorite game Parcheesi. Yup that’s right he cheated! After watching the video of us playing, we caught that he had cheated three times just in the first 15 minutes, but still came out in fourth place. We all laughed in the end because he thought he was going to get away with it. Worse yet when we accused him of cheating he had this face–>

Up until recently when restaurants and stores started opening up again, we’ve barely played Parcheesi. I started focusing on training for a second job, then preparing for classes, then returning to my main job. Even though this was all very exciting to me, one can say that I was overwhelmed with so much on my plate. However, something about having a lot on my plate is exciting to me. When I’m resting I spend time on social media like Instagram or TikTok or simply searching something online. While doing this I came across an ad that made my day. A Parcheesi mobile game ad! 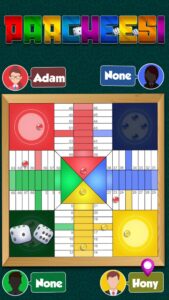 I can’t explain how happy I was to see Parcheesi again. It reminded me instantly of when we played three times in a row or when we had a Parcheesi winning board and my brother was in the lead. Also, it reminded me of the intense moments while playing Parcheesi. We were constantly screaming and I bet our neighbors were questioning why we were screaming at 1 am. I even brought up playing Parcheesi once again and we did. If it wasn’t for that ad I saw while surfing the web, we wouldn’t have played again until who knows when. I highly recommend trying Parcheesi out. Either with friends or family members because the game can get pretty intense sometimes, but it’s a great game. If the app isn’t for you, try playing on the website.

***By the way, I even created my first TikTok video while playing.  Not the best video but check it out 🙂