After the first week I was starting to understand what I had to do and made the assumption that this course was going to be easy. Up until we were given our first assignment which instructed us to create our very first blog post and it’s also where the journey begins. The post asked what makes you happy on the internet and since I use Youtube on a daily basis I decided to include it. Youtube is a social media platform on the internet that I use every day, where content creators would upload their work and entertain their users. Assignment #2 instructed the class to express their thoughts on how they feel about the course so far in which I went into thought it was generally a really interesting class. This assignment mainly was for testing our abilities to use Gifs and Memes to which goes into the next assignment asking whether Memes are Art or not. I answered this question in my blog post stating that Memes are Art.

In this class, my favorite blog posts were Weeks 1,2,3. These were my favorites because I felt like this is where I was most creative and I was really proud of the results. Each week challenged my storytelling, creativity, and writing skills. We are always telling stories whether writing them online or in person. These skills I have learned in this class will be put to good use.

My fellow classmate Elijah Adkins has created a website called People’s Voices. I think he did a great job with the overall design and how he made it very digestible. I learned that he was a journalism major, and I think that the website fit well with what he was going for.

My second blog post is about a day I spent in Manhattan. I recently spent some needed time with my girlfriend. I really needed to clear my mind and to have a day where I could reset. We went around to get food and just have fun. We honestly didn’t shop a lot, we mostly walked around talking about our future. I really enjoyed it as it helped me clear my mind.

To be perfectly honest, creating this website and taking my time to plan things, I found it very fun. My website ChillLiang is where I will be able to express myself and be able to communicate with my readers.

I want a website where I can post travel, food, and random pictures of my life, and hopefully, entertain someone in the meantime. A day in the life of me

Customizing the website so far has been a little annoying because sometimes I can’t get the page to look as I want it to. I wanted my site icon to be super minimal, so I went with Chill 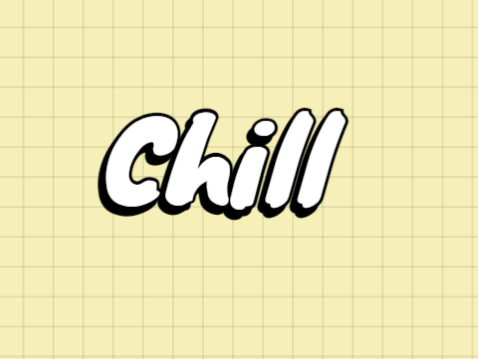 As for my content, my plan is to create a lifestyle type of blog where I would be posting about my lifestyle and food in my main blog. I also created a category for family, where I would post personal photos for my friends and family to be able to see. I want the coverage to be a collage of everything that makes me, me.

So I chose the domain name chilliang as my domain name because it sounds like it could be the designation of where I post everything. I will likely have a private tab for friends and family to who I have to give access. But other areas where I could share my experience with such as food, travel, and my past encounters with trauma.  MY BABY

After taking some time to think about what kind of domain names I would want it became apparent I don’t really know myself that well. At first, I had come up with ChilLiang, which has chilling and my last name in it. This would be where I would post about my experiences with friends and family.

I had also come up with Ginye, which sounds like a genie. I took my father’s first name and my mom’s last name to make it.  I would like to keep this as a photo book for my family and as a place to store our memories so that my kids or my grandkids could forever be able to see my parents.

I had come up with Williang, which almost sounds like willing. It is a combination of Will and Liang, I think that this could be a personal blog site, where I could post about my experiences with trauma, and other various experiences to share with people going through similar things.

Another domain name I had come up with would be W&SNTF, which would be an abbreviation for William and Sharon never to be forgotten. Sharon is obviously my significant other, and as cliche and cheesy as it may be. I do think that it is a good name. I have spent a good part of my life with my significant other and I think that I would be able to post pictures of our adventures, and of course our problems. I think that throughout this era of technology, it lacks authenticity and genuineness that makes everything so plain and bland.

At this point, I honestly gave up with thinking up a meaningful domain name as that was really what I could think of. However, after eating dinner I had come up with WilliamsFNF, which would be Williams Friends and Family, another place to have pictures and etc.

After making the mmm page, I found it was very easy to get distracted and add as many gifs, pictures, etc to the page. I found that it was very easy to use the tools and there was a guide when you first created the website. I followed the template and added my email, my Twitter, and my Instagram tags. I figured I should add some personality, and add my twist and take on the page. This website that I created was honestly my very first experience with working with a website. 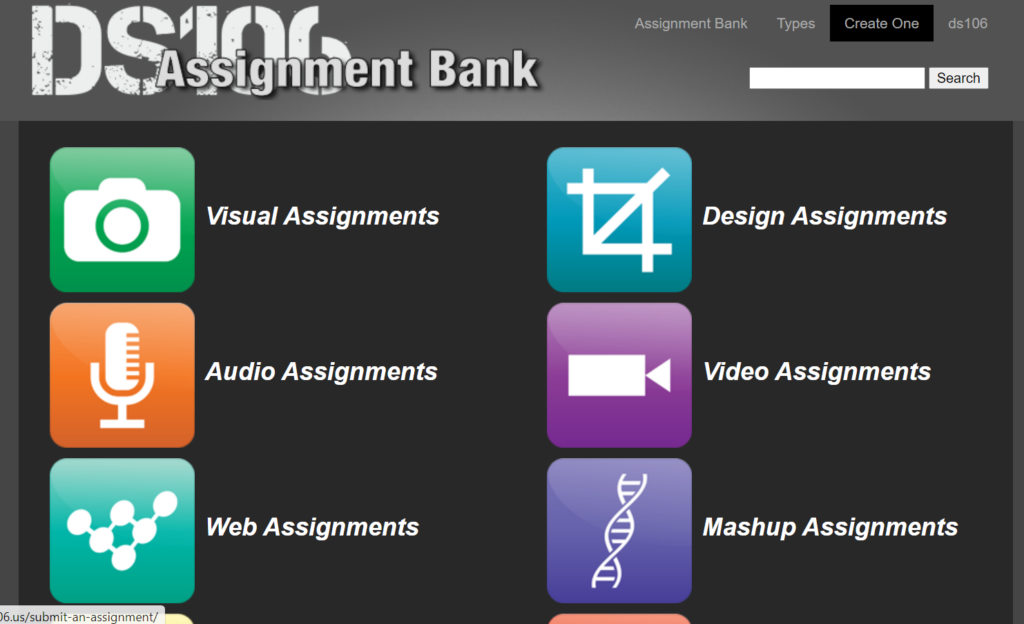 DS 106 has been one of the less exciting projects I have completed for CT 101 so far. It could seem easy, but it is definitely challenging, especially when scrolling through all the options available on the respitory. Honestly, it took me a few hours going through all the projects posted on DS 106 website, as well as reading through them to see what looks engaging.

I ended up with a writing assignment nonconformity 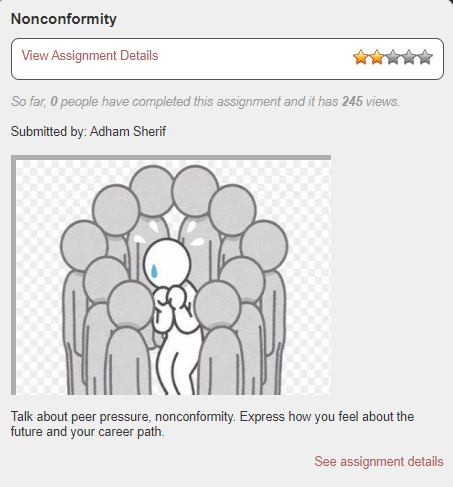 Throughout high school, at an impressionable age, it is easy to follow the wrong people. You do not really get to know how someone truly is until they mature, and you could find their true colors. I luckily stopped hanging out with my older friends, as they moved on to a life full of partying and taking whatever drugs they can. I remember feeling left out when I had to work and they were out partying. For my career and my future, I think working hard and hopefully having a good mentality will lead me towards a bright future.

I honestly, do not know what kind of career path I want to commit to, therefore, I tried taking personality and career tests, and they always lead me to work alone or a startup business. But only time will tell.

In my opinion, memes are a form of art. Art is very vague and broad. It could quite literally be anything. Memes are quite literally everything. Therefore Meme Equals Art.

All jokes aside, I do think that memes are a form of art because people are able to express themselves with a simple picture. Sometimes Art can be abstract and have a different meaning viewed by different people. For example, there have been times where I have been sent memes by my friends and I didn’t quite understand it. However, I do think that memes could be a form of art depending on the viewer. According to the video it stated, “ to evoke in oneself a feeling one has once experienced and having it evoked in oneself, then by means of movements, lines, colors, or sounds to transmit that feeling so that others experience the same feeling.” this elaborates the point that art is very broad and can be applied to almost anything.

I think that there are different forms of art whether that is through painting on a canvas, sculpting a sculpture, and various forms of creation including memes. While some people would not like to think of memes as art, it is certainly a form of creativity that allows people to share a similar experience and connect with others who have experienced something similar.

My first day of CT101 was interesting. I personally thought that the class was going to be the same but slightly different from my other CT courses. When discussing the syllabus, it was pretty straightforward and I figured I was going to be able to use this course as a creative outlet. CT101 is significantly more appealing compared to my other courses. I feel like the majority of the other courses that I have taken were me cramming knowledge into my brain and as quickly as possible. Some potentials of this class are that students are able to express themselves freely. And the Professor makes it obvious that he cares for his students and does not want them to see this as a chore, rather a learning experience and to let us be more open to our peers

What makes me really happy on the internet, is that I am able to connect with my friends who are in different states. I could play online games with them, and communicating with them is truly a blessing. I have two cousins who are in the military, and I am able to contact them easily through an application called Discord. Another would be YouTube, and finally, it would be a game called Valiant.