I liked the concept of this assignment.

I think I can successfully complete the assignment that I have hyperlinked above.

I am trying to tell a story using a common belief believed by brown parents. Can you guess the story?

I have chosen to complete this assignment above because firstly, I think I have acquired the skills to complete it successfully. Also, this is a digital storytelling course and I thought let’s tell a story by using GIFs.

As I was browsing the two websites, all the assignments seemed interesting and fun to do.  Above, I have completed an assignment I already knew how to do. But I would love to learn how to complete this assignment. It looks really interesting! 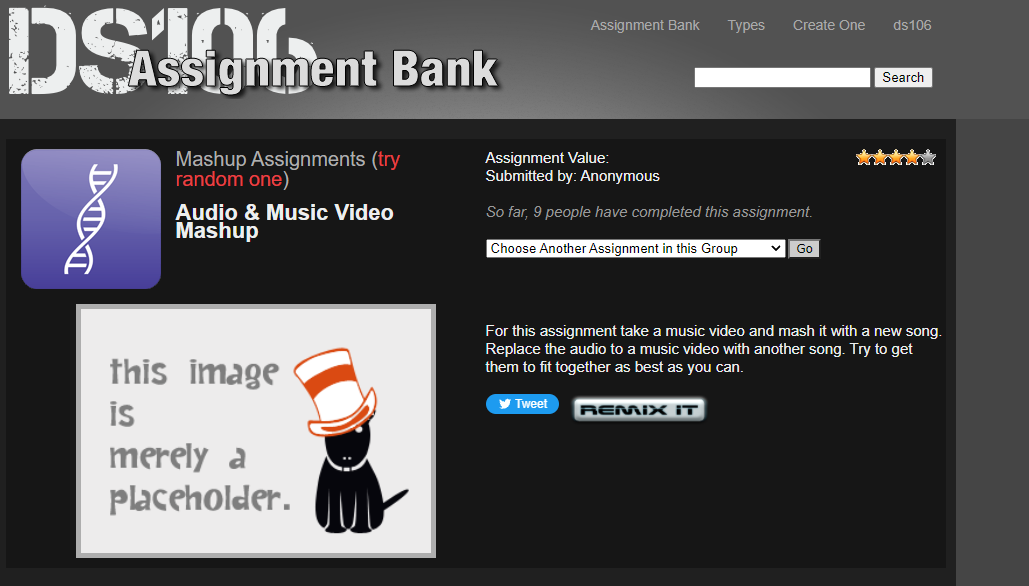 I think these skills will be greatly useful for us technology students in future. But as I am new to learning technologies, I am not sure which skills are necessary to complete this assignment successfully. There should be a particular software that we can use. These skills are important to have because we are here to learn communicating using technologies. And I think this should be an useful skill for a Communications Technology student to have how to replace the audio of a music video with different audio.

Looks like even if you aren’t already in love with pop art, at the end of this semester you’ll be in madly love with it. CT 101 is making me realize that half of the time me and my friends are laughing together online, are by sharing memes, gifs from the internet. 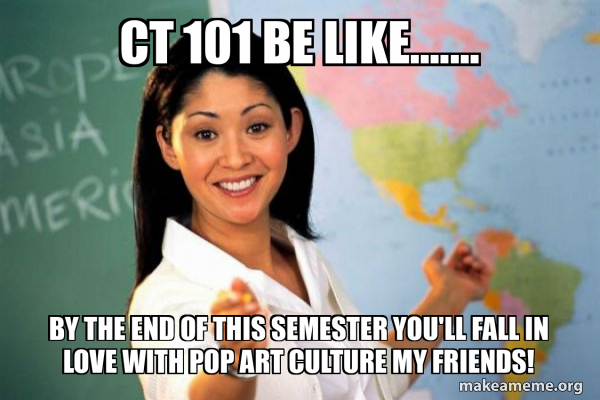 Host from The PBS Idea Channel Mike Rugnetta emphasized that anyone around the world can stay communicated by creating and sharing memes on the internet. Isn’t that awesome? According to this show, British historian R.G Collingwood said that, “Internet memes are the performance of emotion, and not it’s true expression, making meme makers ranters and ravers and not actual artists”. I halfway agree with his perception. According to what I perceive on the internet everyday, meme makers are the different kind of artists who like to share not only their emotions but also other sentiments as well using a funny tone, a humorous tone. This particular group of people tend to express themselves inserting texts through the image of an angry teacher, happy mom, annoying cat, or a joker.

In the article “Are Memes The New Art Form of The 21st Century?” by Em Mampusti, the same idea was shared. For example, there are thousands of meme creators on the internet like Chloe Caparas who share important societal messages by simply making a meme using their own humor. Personally I think, serious issues can be discussed and brought upon without making it seem so serious. This method actually helps others to realize the depth of the issue more. For example, I found the meme below on the internet and it felt so relatable to me instantly. 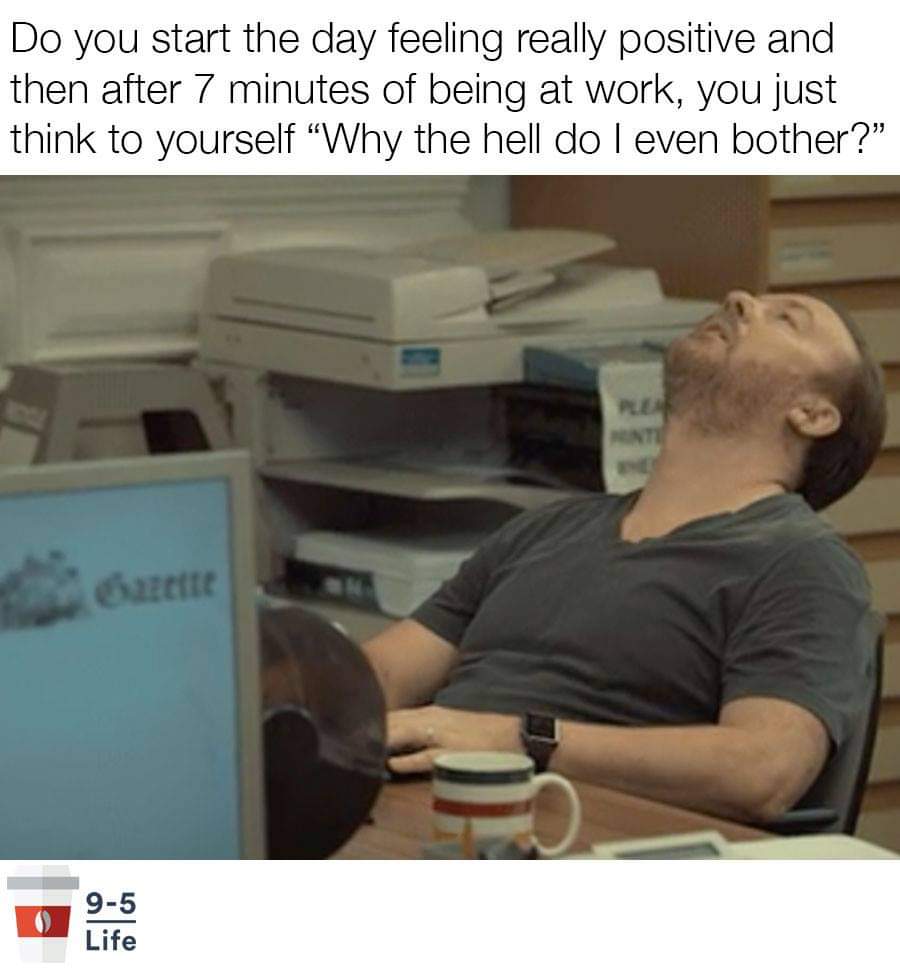 What can I say.. I am a positive person and I like to start my day with a motivated mind. Then as always ⊂Life happens!⊃ Everything starts to feel so overwhelming that I’ll literally be dragging myself to complete my tasks. 🙂

I loved learning about the painter and meme artist Lauren Kaelin on the article “Are memes the pop culture art of our era?” by Kate Knibbs. She’s the living proof that memes can be a form of self-expression. She loves to make memes following her own unique style. She’s so cool and she loves what she does! One of her extraordinary projects is the “Benjamemes” project. She sees a meme from her vision and that turns it into something extraordinary. She worked on a picture of a monkey on which she touched every details of it. It’s amazing how she gives her own work a value by turning it into something how she would like to see it. Everything she makes is unique as she said, “A successful meme is by definition reproducible, shareable, and recognizable. Benjamemes creates an aura where none previously existed”. Her style, perception, ability to see though details makes her memes different from the original.

Lauren Kaelin isn’t the only person showing her passion, perception by creating memes. There are so many meme artists, gif artists all over the internet who feel comfortable sharing their unique thoughts by creating and sharing memes. On the article “Are Memes The New Art Form of The 21st Century?” by Em Mampusti, we learn about a Singaporean meme maker named Yu Tong Yap. She shared that she has to think of new ideas to make a meme in order to create an impactful message. I think this way someone’s creativity level boosts up as well. Self-expression and creativity work really well together in terms of making memes, gifs. You are making a simple still from a movie into something that you have imagined inside your mind. You are using that image to create something very thoughtful and useful for others. 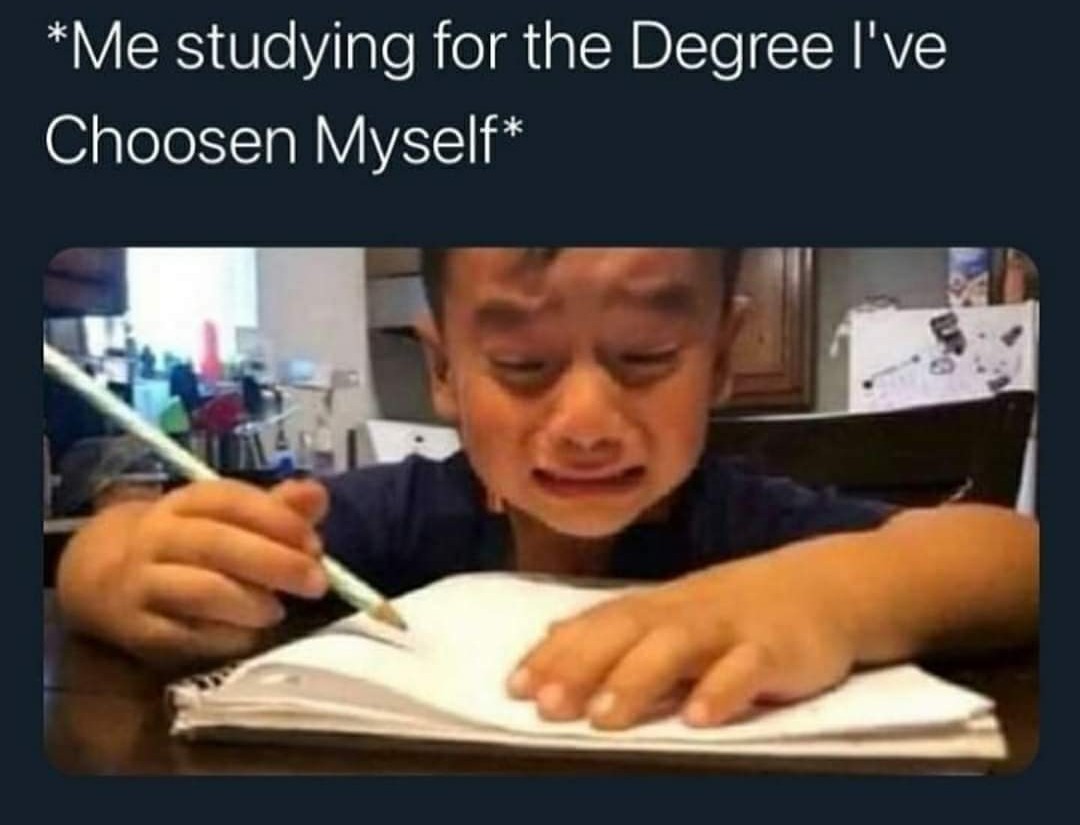 This is another meme I recently found on Facebook and had to share with my friends. Not only me, this meme is relatable to almost every student out there. As much as we love studying what we chose to study, at times we feel overwhelmed by piles of assignments and want to give up. But I swear, this is not what I am looking like as I am doing this assignment. Honestly, even an hour ago I was stressing out by taking notes on what is required from this particular assignment (the video, the article, the article that I found). But again that’s me, stressing over everything. It was fun creating my first meme ever. And it’s fun doing this assignment, now when every information is sorted.

The video and articles taught me facts that I never thought existed. We always think people do not think deeply about art as they do about science. We always think people are only serious about serious things like impeaching Trump and “Why there aren’t enough paper towels left on this supermarket?”. Art is a serious matter and many people live by being the cool artists that they are.  So many laughs wouldn’t take place if memes were not made and shared. The article enlightened me with the knowledge that there are passionate and courageous people out there who follow their hearts and never stop believing in the power of a creative meme. Projects like “Benjamemes”, studio artists displaying their arts, etc are brave steps towards a modern, meme-giphy-generated generation to me. On the video, Mike Rugnetta shared quotes from famous historians. We get to know what people like Leo Tolstoy thought about art.

Right, on the first day of CT 101 I thought poor me and my fellow classmates will be sitting in front of our computers and hear Professor Ryan reading out from his “6 page long course syllabus”. Thankfully, he did not provide us with the long listed to-d0 things already for the entire semester! I was surprised there.

Our Professor’s happy face says it all. This is a class for learning amazing things. On the very first day I knew I am going to enjoy this class. I didn’t show it like the character on the GIF above is showing, but that’s how I was feeling. I get to learn these cool stuffs! This class is different from the courses I have taken so far. I think the main reason is how Professor Ryan gives out all positive vibes and energies about the entire course. It’s very comforting that he assures us it is going to teach us so many things in fun ways. It is a break from the other classes overwhelmed with long syllabuses and researches.

The first week of a semester is always overwhelming because we need to get to know our professors, what the courses offer, what we must do to successfully pass the courses, etc.  It takes a week or two to feel settled in the classes. On the very first day, we breathed a fresh air because he is a happy professor to teach us happy & fun things.

Do you by any chance have any doubts that by the end of the semester we’ll  learn several creative contents from CT 101? Do not doubt it. See, now we know how to make GIF’s! (I cannot stop). Each content will take us a step closer to the eagerness to learn more.

I hope at the end of the semester we all pass with good grades! I look forward to be properly skilled and knowledgeable at each content that Professor Ryan will teach us throughout the semester. I want to be able to apply these skills in our next classes.

As the COO of Giphy Adam Leibsohn said, “The easiest, simplest thing wins“, I found Giphy easier to create my own GIFs. Even though there isn’t much difference between Giphy and Imjur, I automatically felt more comfortable using Giphy because it’s more familiar to us. I really had fun making the GIFs on Giphy. So I made all these by myself, instead of taking any from Giphy or Imjur.

It was interesting learning some facts about how GIF’s became everyone’s favorite starting from the 1990s. It made me recall when was the first time I used a GIF? I couldn’t exactly recall (been only a few years that’s for sure) but I remember having fun with my friends sending GIF’s instead of texts sometimes.

I am a haircare freak. I spend a lot of time researching how to take good care of my hair and grow it longer . I cut my hair by myself at home last year and it became really short. So, I am always looking for more tips and natural ways to grow it longer. Recently something caught my eyes and here it is.

I love how the experts share simple and easy tips to keep our hair healthy naturally. ♥ Anyone can follow this. These tutorials make me happy on the internet. As I am always searching on these tips; now my social media platforms, YouTube homepage is most of the time flooded with haircare video suggestions. It makes me happy hence the internet makes me happy! 〈♥〉

Yes, I feel REALLY good and happy taking care of my hair however it is.

But as of talking about being patient about it? Not me! I have been extremely impatient about growing my hair longer! Well, I have calmed down a bit now when it’s way longer than before.

Working on the betterment of my hair health always makes me happy. Watching these tutorials, reading articles on what to do to stop hairfall, grow hair longer, etc are the sources that make the internet a fun place for me.

Enjoy my post and the clips that I have attached! ♥