I have been using gifs with my friends for a long time now and we have them ready to send while talking about anything. From all of the choices on  ds106 assignment blank, I picked one in the animated gifs section. 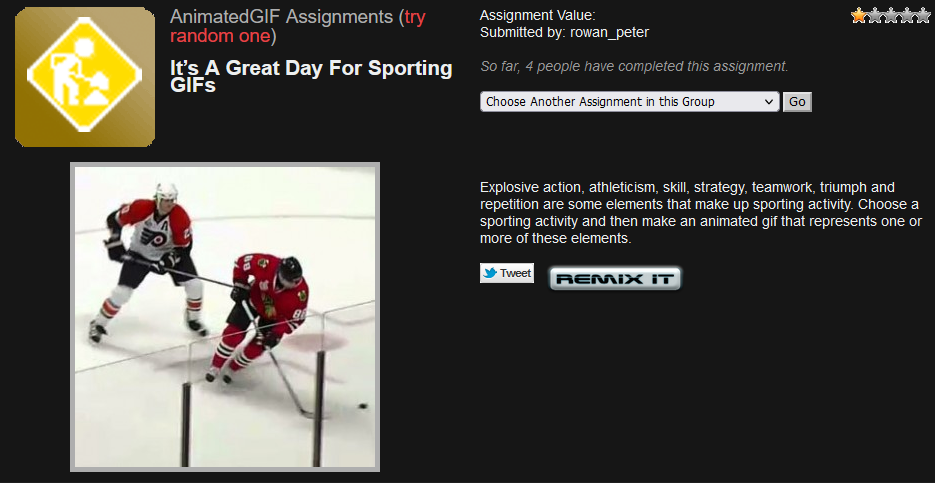 I can relate to this a little because the NBA season started back up and while in a conversation with my friends we were sending each other gifs of random basketball plays. I thought of these block Lebron James did and thought to include them in this assignment.

This is one of the many blocks that Lebron James has done but I like this one a lot because this was during the 2016 finals where, in my opinion, he played one of his best series and it was the only time that a team has ever come back from a 3-1 in the finals to win the championship.

This was another block that he did which was in the same series and the trophy getting blocked away from the opposing team (Golden States Warriors) is Lebron James denying the repeat win for them and taking the win for himself and his team.

Another assignment that I find interesting is Profiles of ds106 Super Heroes.

The idea for this assignment is very simple and its something I can write about. Since I have been learning front-end this assignment will take 20-30 minutes to do finish and it will take about one or two projects for me to be comfortable with this concept and it is something anyone can pick up. The tools needed to make a simple page about superheros requires the use of basic HTML/CSS which is very easy to pick up in my opinion. For someone going into software development I think the skills used for this are important as you go more in-depth learning about HTML/CSS.

Memes are here to stay, and they are very much pieces of art. I really like that memes can be made from anything and can be used to lift a persons mood within the first look. Even though they are fun to look at and are very creative I feel like it’s very hard to make a good meme but for some people it might just be something they dreamt of and some just need an idea in their brain and once they have an idea of what to make putting it into meme format is very easy.

With a quick search on YouTube for “are memes art?” I came across this video of Shia LaBeouf’s answer to “are memes art?” and I think he put it in a good way in which a lot of people can relate to that “anything that moves you is art” and memes tend to do that. I believe that memes are good and tend to be for most people but from this article by Sudipto Roy, they make a good point about memes being used for something Disruptive; “An ironic and light-hearted treatment of a fragmented subject, memes is now seen as a form of ‘everyday conceptualism’ in the modern world.” Some people do tend to see memes in a bad way but memes are in a way universal and while some can really like something others might not. But for me and my friends memes are great way for us to share good moments with each other and have a good time.

Here are a few memes that I really like: 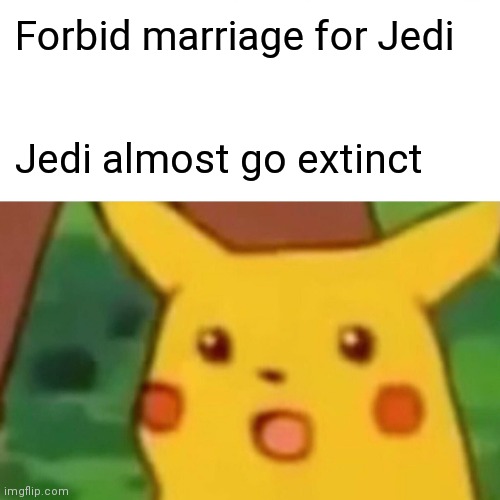 This is from star wars and there are a group of people called the Jedi and they are not to have any relationship because they believe that it can be harmful for the person as it leads to “jealousy and fear of loss, and ultimately the dark side of the Force,” dark side being the exact opposite of everything the Jedi believe in. Of course because of this the above meme was made and I think its a really good one as it uses the pikachu face for the moment perfectly. 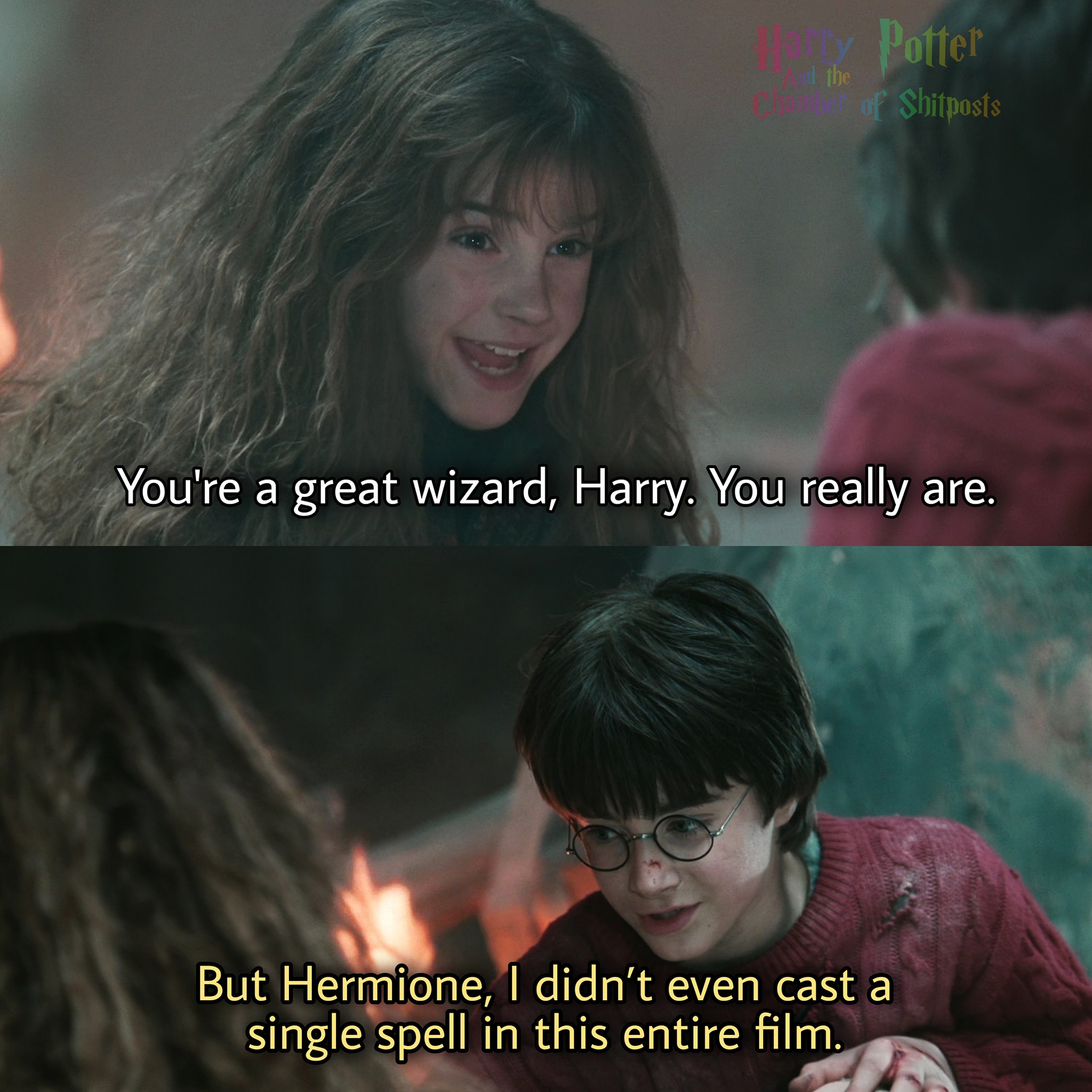 As much as I love the Harry Potter movies it still blows my mind that the main character of a film series that has 8 movies did not cast a single spell. This is a movie series about wizards going to school for the sole purpose of learning and controlling their magic. Still love the movies/books.

I had a few friends take CT101 before and they told me that this was a really fun class and that they just made memes all week long. I wanted to take this class a few semesters ago but wanted to get all my required classes for computer science out of the way. CT101 so far has been really fun, I never used GIFS with while also describing how I feel about something or just talking about something in general, so this class is different when it comes to that. I have a class at 8am before this so I am usually out of it so I am glad we have recordings just in case I miss something.

So far this class has been very new with how we submit our work and the use of media/gifs in our responses. I was very curious hearing about this class from my friends and now that I am taking it, I can see what they were talking about. Out of all the stressful classes this is definitely a class that lightens the mood even when doing an assignment. I think it helps a lot that the professor teaching the course is also very invested in what they teach and are also invested with the students in the course makes learning and doing things a lot better then just showing up for class and doing the same thing every time without any interaction.

CT101 is very different from all the other classes I am taking this semester. Out of the 5 classes I am taking this semester this is the only one that does not have any math in the course, and because of that there is no stress from this class compared to my other classes. I am learning some front-end in one of my classes where we are going over HTML/CSS and I can see those relating to the way we submit our responses and the layout that gets created when we publish our posts. When it comes to this class I feel like I can use the creative side of putting together words with GIFS and use them in my code for when I plan on making my own website/portfolio which is most likely going to be at the end of this semester when we get the month off. Hopefully I can use some of the stuff I learn/make in this class for that.

Anime is a form of Japanese animation which is usually based off of Manga. Manga are comic books/graphic novels that originate from Japan. I have been watching anime and reading manga for as long as I can remember. The internet also makes it possible for me to watch and read them. They are always published in Japanese first whether it is anime or manga and through the internet I have them available for me to enjoy in English via online websites or in the form of books(Manga). This has brought me many hours of pure joy and sometimes sadness as you get really absorbed in different stories.

My favorite anime/manga of all time is One Piece, which started in 1997 and is still ongoing as well as the 2nd most sold comic in the world, Superman is first and Batman is third in-case someone was curious. The internet has made it possible for me to read and watch not just One Piece but many more and be part of something for 10 plus years! If it wasn’t for the internet, I wouldn’t have known if manga or anime even existed and I am very thankful for that.