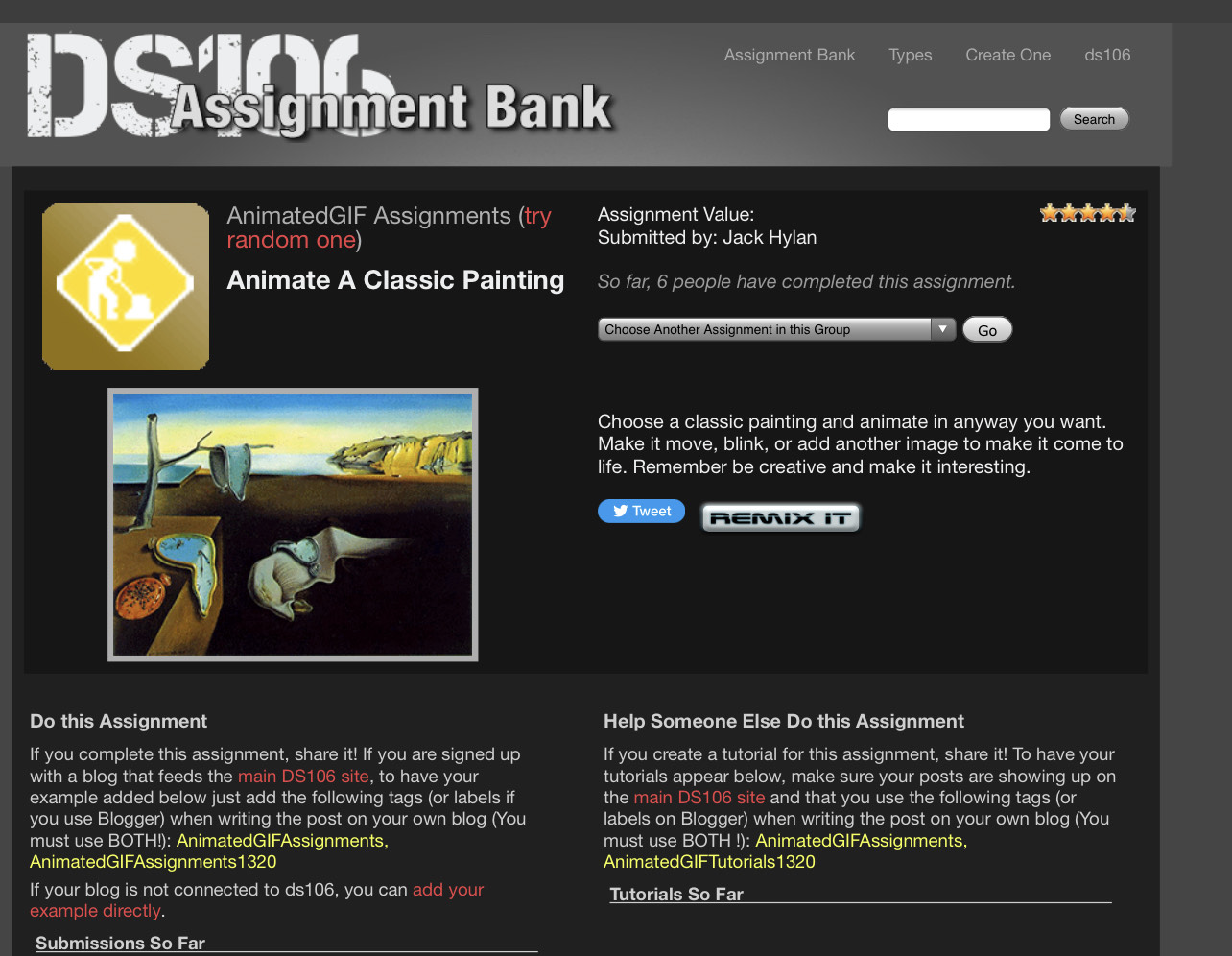 I selected this assignment because I thought it would be really fun to make. I had taken AP art history back in high school so I thought it would be cool to take a classic painting that I liked and make it come to life. The painting “The Two Fridas” (1939) by Frida Kahlo shows a bond by the vein that connects both Fridas. One is weakened by an exposed heart and still yearns for her lost love while the other is strong and clamps down on that figurative and literal tie with a hemostat. There are so many small details within the painting I think that’s one of the reasons I picked the assignment.

My first outcome for this assignment is posted above. I used Giphy to do the assignment, since we have used it before I thought it would be great to work with it again. I was very satisfied with the outcome because it looks like the idea I had in mind. Giphy is quickly becoming a very useful tool and anyone can learn to use it which is great. There were so many stickers that I could choose from which I liked. 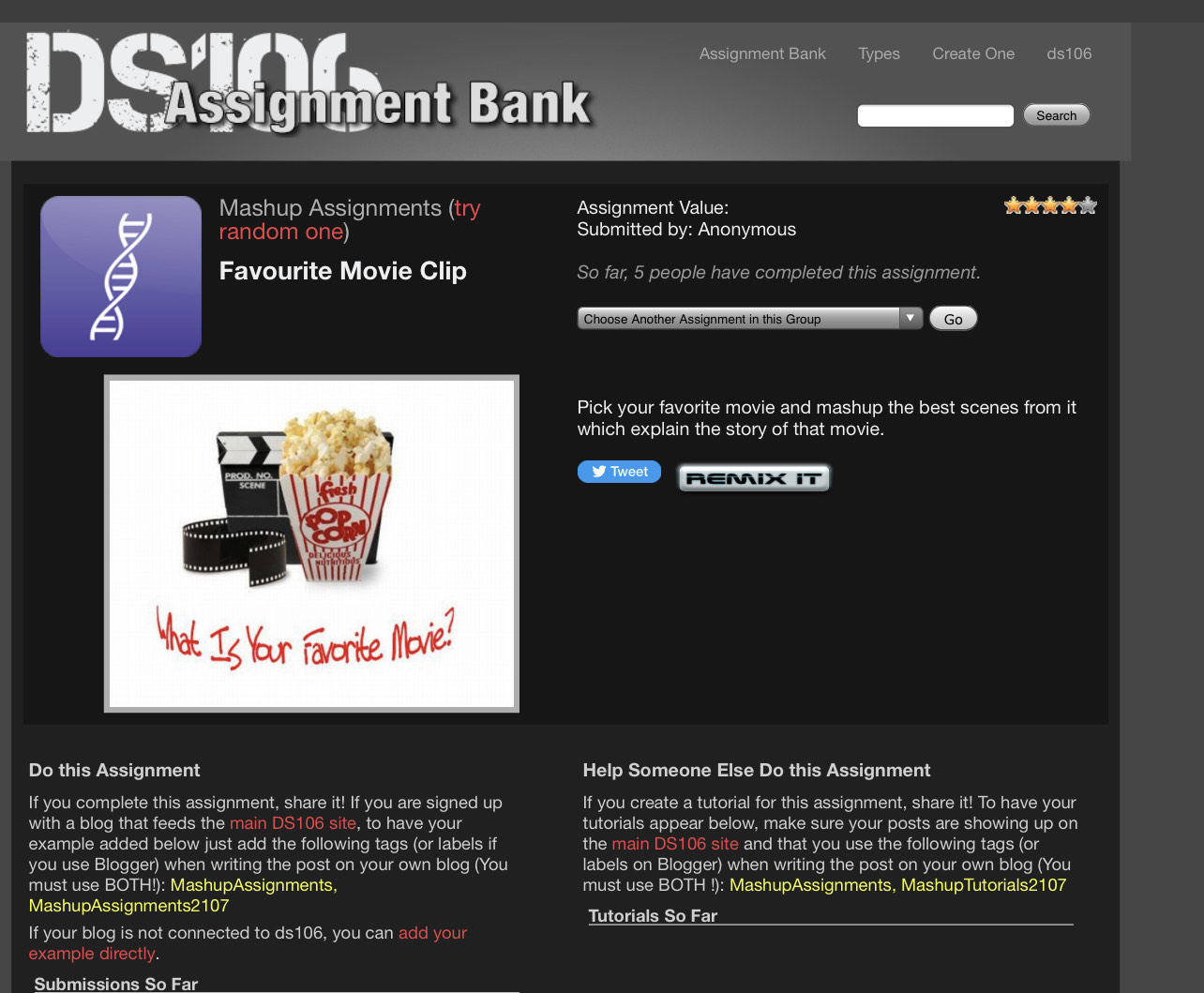 This assignment also seemed very fun to do. But I just know I can’t do it right now because first I have to learn how to cut clips and then put them together. I’m still having difficulty remembering every step to make a good post, although it will definitely take some time. I think I will learn how to complete the assignment. Thinking ahead of time I think I’ll do the movie Coraline since it’s one of my favorite stop-motion animated movies. I think I should do at least one of the assignments for each category, they all have different tools needed to complete them which would help me figure out different types of methods. I think these skills are important at least to me because they are online. In other words, as we saw through the pandemic almost everything was moved to online. I think the skills could be useful for my career as a journalist and also could be useful to get into different hobbies. 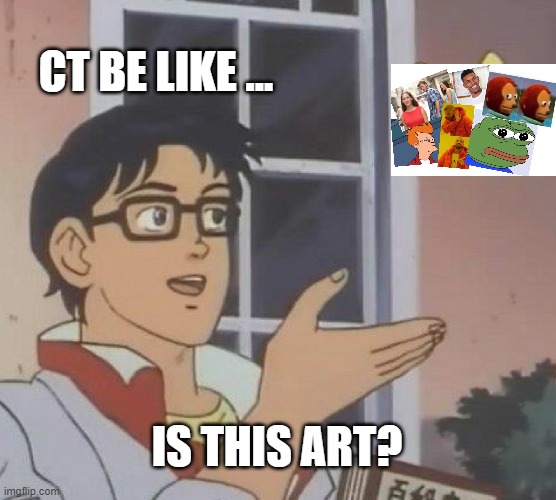 Art has a different meaning for everyone. I think internet memes are art because they are being created. The YouTube video shows how Tolstoy, Aristotle, and Warhol might agree with memes being art while Immanuel Kant and David Hume might disagree because they’re definition of art is something that is beautiful. Once again in my opinion memes are “beautiful” because they bring people together. A group of people will like certain memes over others because of the context it contains. For example the essay talks about the Grumpy Cat meme, cat-lovers will be more drawn to that meme, and also the different memes that were created with the cat. So in other words they take a certain image but include different captions and/or make different styles of that one image. Memes  can be created from traditional art not just trendy topics which makes possible creations infinite. 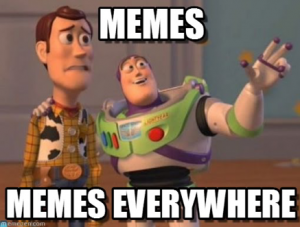 I found an article that expressed what I thought perfectly about how memes are able to have many forms and are shared in many media spaces. Memes are good for art because they’re a form of expression, during difficult times many people cope using dark humor and memes give them that release. Memes are definitely good for communication as the article states “ordinary people could understand this new art, because it reflected their world, not some unrecognizable other.” Memes are sometimes even considered the street art of the Internet world which is why some might say it’s not art at all but memes can include real world problems and occurrences. 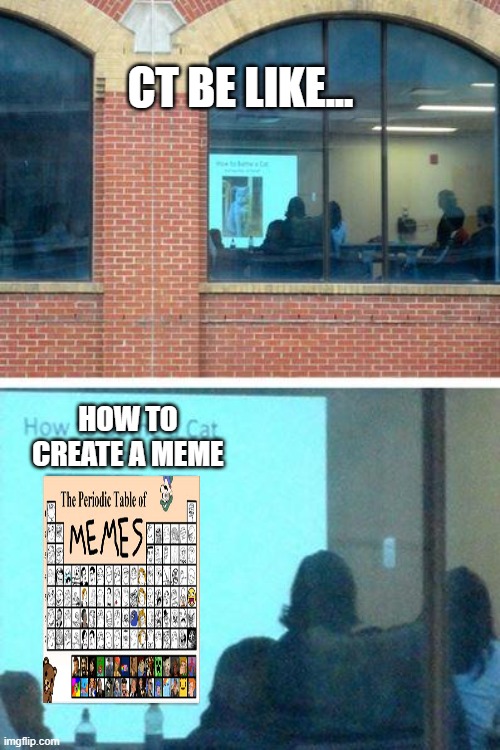 After reading another article my opinion of memes being art just grew stronger because the article explained how much thought goes into making a meme.  Memes have to be ‘short and sweet’ because society has a short attention span. In other words we want new content every other hour. Memes also give us new points of views on current topics. To close up the article summary “memes are a universal form.”

The definition of meme will be different for every community. Memes are usually humorous and contain popular culture. The way the word meme came to be was very interesting but made so much sense and it’s crazy to think of the comparison it had to the word gene. Memes were not always understood which is unbelievable to a certain point because like I mentioned before people have different interests so not everyone will understand a meme that has to do with let’s say one particular movie scene.

Side note: The first and third meme I made by using Imgflip which I found the most helpful page to use. It allows you to insert a picture within the meme template that you want to use. The second meme I just took from google and the last “meme” represents the first viral meme which I downloaded from Giphy.

On the first day of CT101 I was nervous at first because the description of the class stated that we would have to build an online identity and it also mentioned networked conversation. And I interpreted it as having to create a personality and be able to converse with others. Which could be somewhat difficult since the pandemic “shut down” most of my social skills.

I did enjoy hearing about the course and its creative content, I was really excited to be using cuny commons again and to have the flexibility to be creative. I think it is very pleasant to have a community where we can just share our opinions and the things we like.

Compared to my other classes CT101 is very flexible, we can edit our work and we are encouraged to express ourselves. I think that CT101 will help us navigate the internet, we are getting a chance to combine many different tools.

I think the potential of this class would be to be able to make your own blog and be very creative. You will be able to add gifs, screenshots and some many more things. It will be different from other blogs and can even attract in many people. Another potential would be just to have knowledge about technology.

I personally liked Giphy over Imgur. My first three gifs I created were by using Giphy, I had tried to make the third one using Imgur but then realized that you couldn’t add stickers. Which as small as the difference is, it was the fact that I could add stickers to make that gif complete and what I had visualized. The fourth gif I got was from Imgur and the fifth gif I also made using Giphy.

CompuServe created 87a and it was introduced on 15 June, 1987. 87a would later become known as GIF (Graphics Interchange Format) and it would be considered a tool. They can be used for logos, games, small video clips,  to convey emotion and feelings, ect. And yet no one can tell us exactly how to pronounce it! “The GIF itself has become the destination.” The GIF is officially 30-something and is still being treated like a new Internet tool.

The annual MTV Video Music Awards were held on September 12, 2021, in New York City. So many celebrities attended from Jennifer Lopez, Alicia Keys, Cyndi Lauper to Olivia Rodrigo and many more. Many people shared their views about the winners and performances. 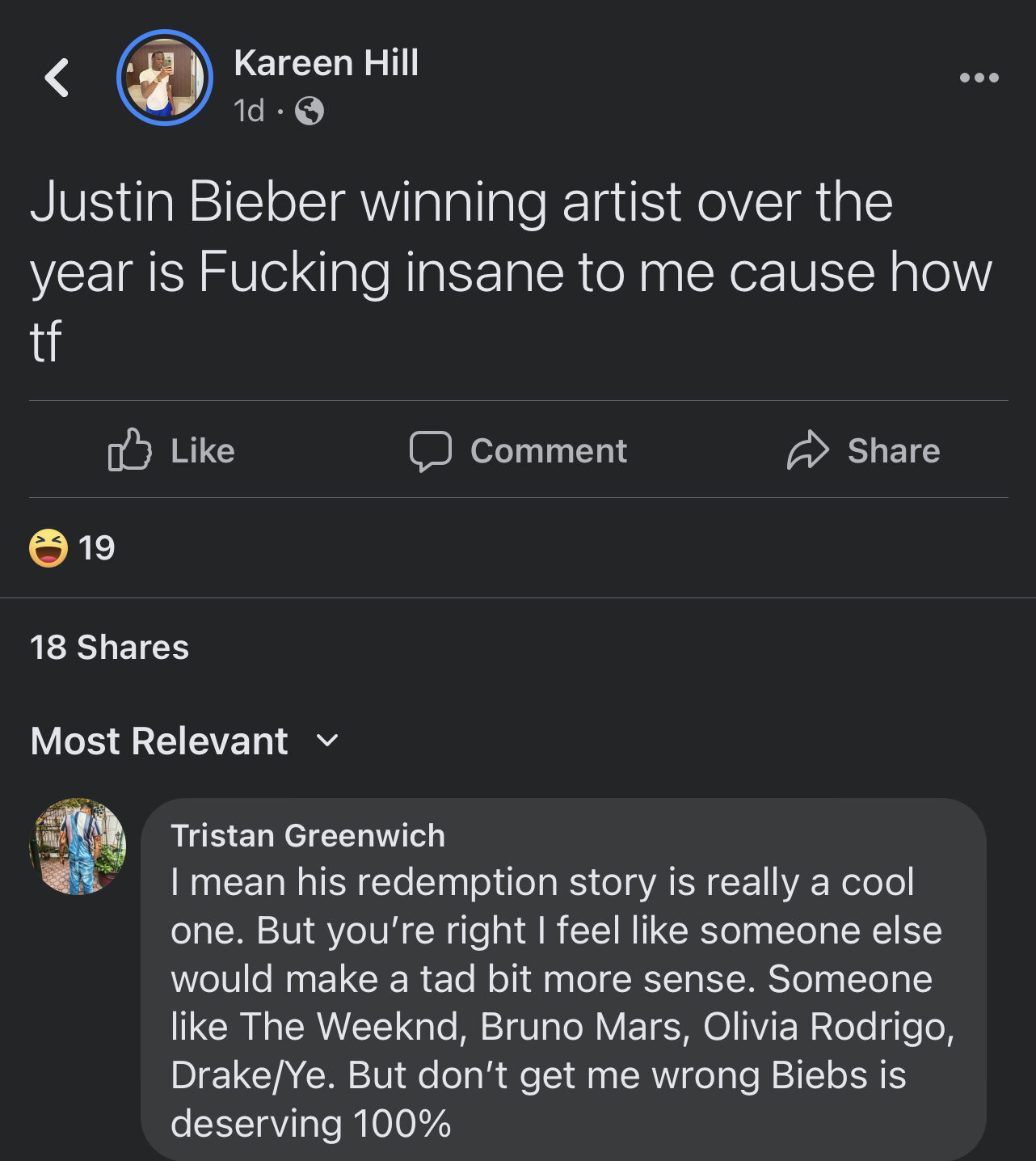 The Facebook post above shows that some people thought Justin Bieber did not deserve to win. As the comment says there were many other artists that should have won, since the VMAs are done by people voting, many think it was an unfair win. 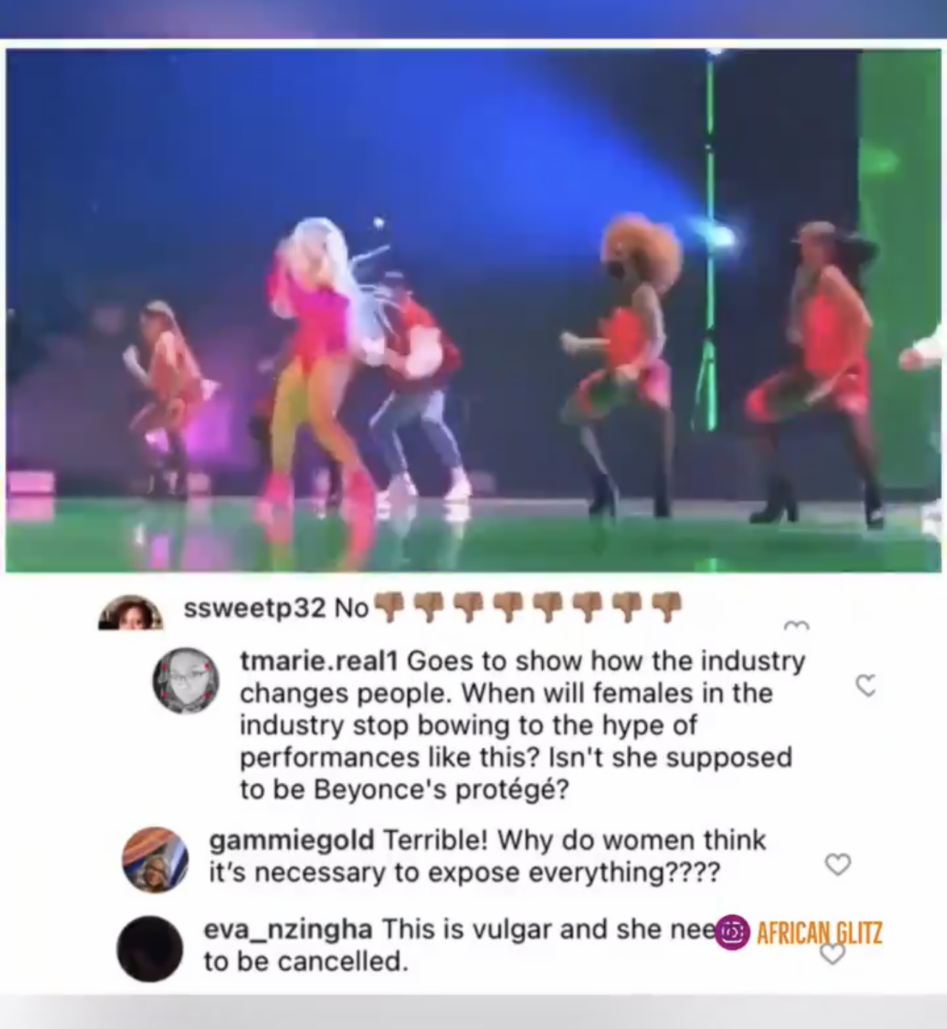 The Tweet above is about Chlöe performing her song “Have Mercy”. They are criticizing Chlöe for her outfit and how it is “very” revealing, but there will always be a double standard because men most of the time have women dancing in bikinis and are not held responsible. What makes me “happy” about this is that the Internet is a free space to express your thoughts but you will always have to be able to defend your argument. 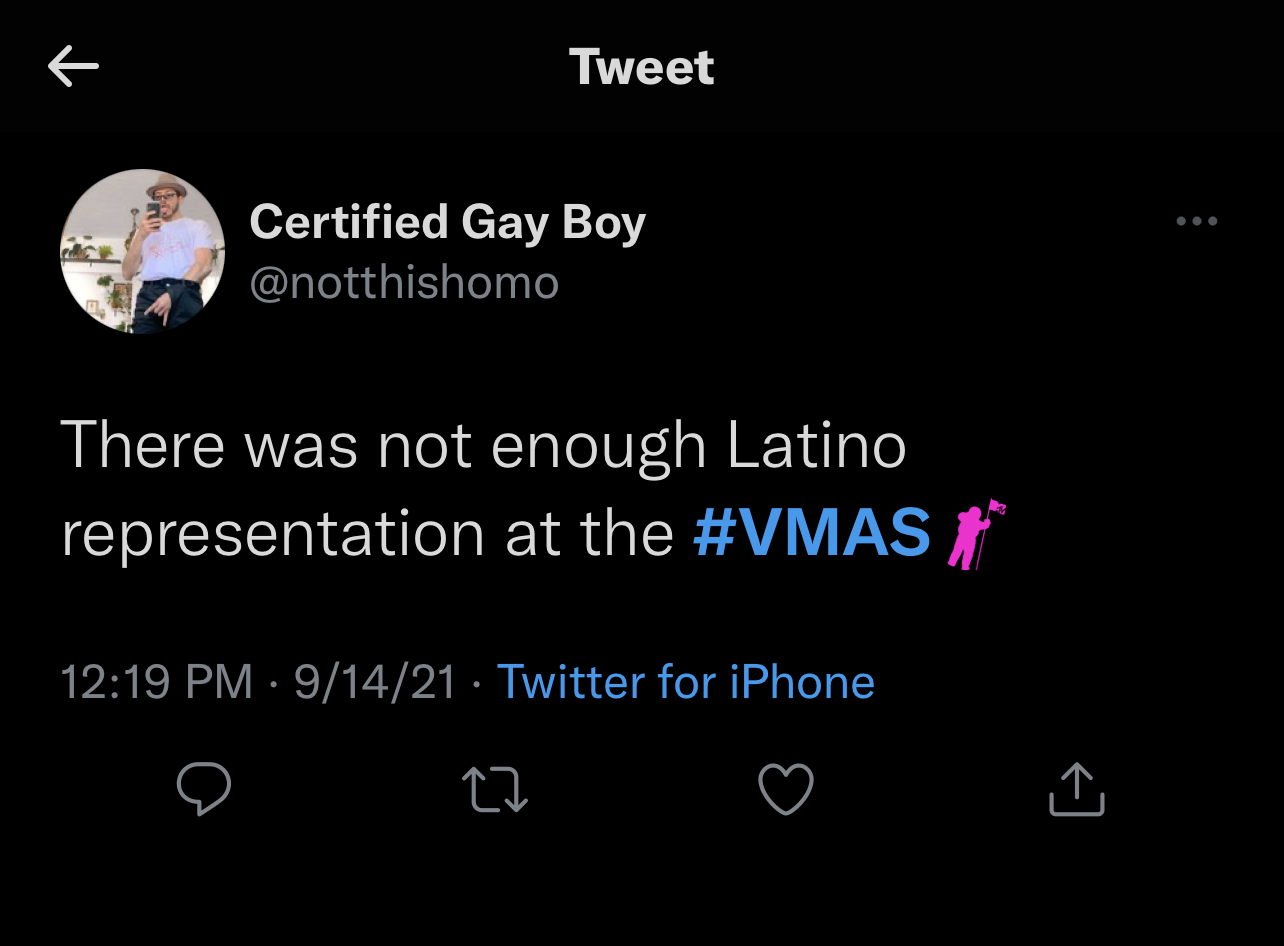 This other Tweet is commenting about the lack of Latino representation, which is something I agree with and it is something that makes me happy because they are making people responsible for it. Rosalía won MTV Video Music Award for Best Latin Video but she is a Spaniard which would make her Hispanic but not Latina.

I guess we will just have to see until next year’s VMAs to see if there is fair voting, if people stop picking on women’s attire and if there is actual Latino/a representation. Overall the Internet makes me happy because they pay attention to detail and make you realize things you wouldn’t originally think of.